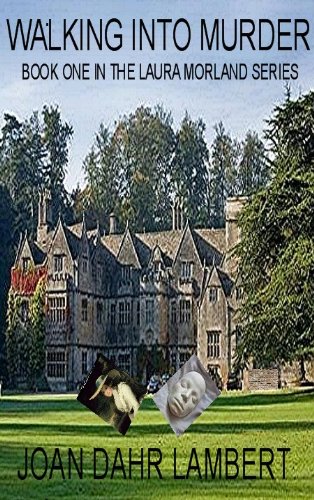 Who would believe that an innocent walking trip in the English Cotswolds would include not just one murder but three, and even more hair-raising adventures? The intrepid American heroine of WALKING INTO MURDER, professor Laura Morland, would have scoffed at the idea. All she wanted was a few days of peace to recover from a humiliating (if not entirely unwelcome) divorce and a chance to test her new independence. That she certainly does; peace is another matter.WALKING INTO MURDER is a light-hearted mystery with a delightful setting, an intriguing plot and distinctive characters headed by Laura Morland, a wonderfully appealing new amateur detective. It is part traditional English mystery, part middle-aged female sleuth of independent spirit who solves mysteries that confound the experts, part primer on the the battle between the sexes since Laura is an expert on gender, part rousing adventure. Laura is hardly Miss Marple - she is younger, more active, attractive, even romantically inclined, but the settings and characters are very British indeed. It's a wonderful read: spine-tingling escapes and confrontations on deserted moors contrast with peaceful interludes in England's quaintest villages and most verdant countryside - and with some near-comic scenes of Laura's inept but ultimately successful efforts to track down the villains even as she eludes their clutches. Mask-making, amateur theatrics, underground tunnels and an escape from a boarded-up cottage are all part of the action. The adventure begins when Laura is invited to teach a seminar on gender issues in London. First she decides to embark on a solo walking trip on the Cotswold Way. The walk soon takes stormy turns. A man plummets out of the thick mist, hauls her into an embrace and begs her to masquerade as his wife. Escorted at gunpoint by an aristocratic Englishman to an ancient manor house, she is confronted by a roomful of eccentrics, any of whom could be the killer of the body she finds in a bedroom - a body that perversely keeps changing its identity. In fact, everyone in in this bizarre household seems to have multiple identities and multiple motivations, making it exceedingly difficult to determine who is telling the truth and even harder to ascertain who is on Laura's side.Curiosity is Laura's dominant trait and she delves into the mystery with possibly unwise abandon. She is determined to unmask the murderer - and to get the best of her alternately charming and irritating would-be husband, to whom she is undeniably attracted. She soon discovers that her fund of scholarly knowledge about male/female relationships is of little help in dealing with a man who refuses to answer her questions, appears to be having a steamy affair with the titled Lady of the house, and who increasingly seems the most likely candidate for murderer. Complicating matters further is his fraught relationship with Laura's able assistant in crime-detection, a fiery, free-spirited runaway who lives in the woods.As Laura probes deeper, the efforts of the villains to silence her become more frantic and her strategies to evade them more ingenious. With total disregard for the escalating danger, she vows to outwit them all. And she does. In a final dramatic - and totally unexpected - scene, she zeroes in on the killer, or it might be more accurate to say the murderer zeroes in on her.Joan Dahr Lambert is the author of CIRCLES OF STONE, a prehistoric novel told through the eyes of three women who became leaders of their tribes, and published by Simon & Schuster in 1997 & 1999. Lambert has written two other prehistoric novels, a novel about wolves for children and a novella, as well as the first two books in the Laura Morland series. The second, BABES IN THE BATHS, will be out soon. Like may published authors, she has decided to try self-publishing. All of her books will soon appear on Kindle and on other on-line venues. 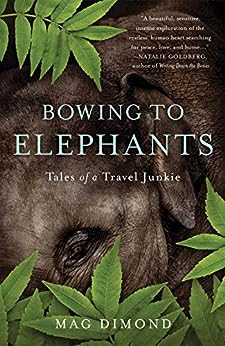 Bowing to Elephants: Tales of a Travel Junkie

In Bowing to Elephants, a woman seeking love and authenticity comes to understand herself as a citizen of the world through decades of wandering the globe. During her travels she sees herself more clearly as she gazes into the feathery eyes of a 14,000-pound African elephant and looks for answers to old questions in Vietnam and the tragically ravaged landscape of Cambodia.Bowing to Elephants is a travel memoir with a twist―the story of an unloved rich girl from San Francisco who becomes a travel junkie, searching for herself in the world to avoid the tragic fate of her narcissistic, alcoholic mother. Haunted by images of childhood loneliness and the need to learn about her world, Dimond journeys to far-flung places―into the perfumed chaos of India, the nostalgic, damp streets of Paris, the gray, watery world of Venice in the winter, the reverent and silent mountains of Bhutan, and the gold temples of Burma. In the end, she accepts the death of the mother she never really had―and finds peace and her authentic self in the refuge of Buddhist practice. 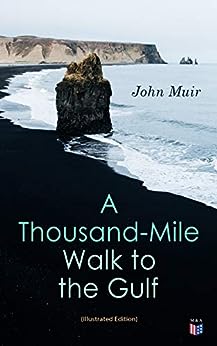 A Thousand-Mile Walk to the Gulf (Illustrated Edition)

"JOHN MUIR, Earth-planet, Universe."—These words are written on the inside cover of the notebook from which the contents of this volume have been taken. They reflect the mood in which the late author and explorer undertook his thousand-mile walk to the Gulf of Mexico. No less does this refreshingly cosmopolitan address, which might have startled any finder of the book, reveal the temper and the comprehensiveness of Mr. Muir's mind. He never was and never could be a parochial student of nature. In September 1867, Muir undertook a walk of about 1,000 miles (1,600 km) from Kentucky to Florida, which he recounted in his book A Thousand-Mile Walk to the Gulf. He had no specific route chosen, except to go by the "wildest, leafiest, and least trodden way I could find." 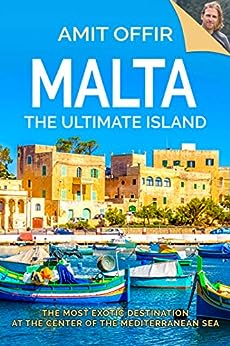 Are you searching for an exotic destination with fascinating history, turquoise colored sea, beautiful beaches, and vibrant nightlife?After vacationing and exploring many exotic destinations all over the world, the traveler Amit Offir arrives in Malta to enjoy everything the island has to offer, and to ascertain whether the stories about the island’s charm justify the prestigious name many tourists have given it. If you would like to vacation on an enchanting island with exotic beaches, exceptional diving sites, interesting attractions, unique culture and history, excellent food and for dessert, a vibrant nightlife - Malta is the perfect destination for you. The fascinating story of the author, and his special approach to life will inspire you, and provide you with a wealth of tools to help you travel often, and enjoy each and every moment on your trip to Malta! In Malta I found everything I was looking for in the perfect vacation,inexpensively, and within short distance of all sites.’- Ideal destination all year round-7,000 years of fascinating history- Perfect for a beach vacation & diving- Excellent for family trips extreme adventures 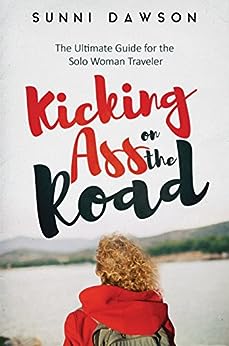 Kicking Ass on the Road: The Ultimate Guide for the Solo Woman Traveler: Travel safe, travel cheap & have the time of your life!

Thinking of traveling solo? Keen for super fun adventures? Ready to be more independent? Want to meet other amazing people? Welcome to your ultimate guide for going solo and having the time of your life. This book will give you everything you need to prepare, what to do whilst you’re there, how to travel safe, tips on romantic liaisons, how to travel cheap and much much more!  "In all my years working on books, I have never come across a better written book on travel.” Pamela Anderson, Freelance Editor. Set out in easy to read chapters, this guide will help you:  Prepare for your trip (including personal, health, insurance, as well as cultural preparations). Pack: helping you pack for any adventure. Comprehensive accommodation and travel booking tips. Everything you need to enjoy days and nights out when you’re there. How to be confident stepping out by yourself.Romance on the road: how to do it & what to look out for. How to look after you on your journey. The ultimate safety guide, tips & tricks. Comprehensive guidance on traveling cheaply.Advice for those wanting to travel for longer periods of time.Helping you go back home.  Packed full of useful advice, checklists and mind maps for everything you need to travel alone with style. This guide is for those wanting everything they need to travel by themselves (or with others), all in the one place. It is a must read for every woman traveler.To find out more about the book & author, watch the short vids on Youtube: https://www.youtube.com/playlist?list=PLEySrs2HIMGEglUzOUhyIJ4yj-IWaN_l8. 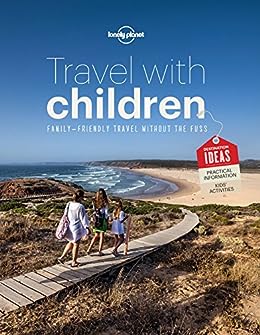 How Far Will You Go? Priorities change, new routines are adopted - but here at Lonely Planet we don't believe imaginative holidays have to end when kids arrive. So welcome to our first supplement specifically aimed at those who want to introduce the delights of world exploration to their children. The guide draws on our new Travel with Children book - 224 pages of inspiration and advice, whether you're looking for simple new ideas in familiar destinations or to embark on an adventure your family will never forget. You'll find a world of ideas within these pages - enjoy! Authors: Sophie Caupeil, Jean-Bernard Carillet, Sandrine Galotta, Jonathan Tartour and Marie Thureau 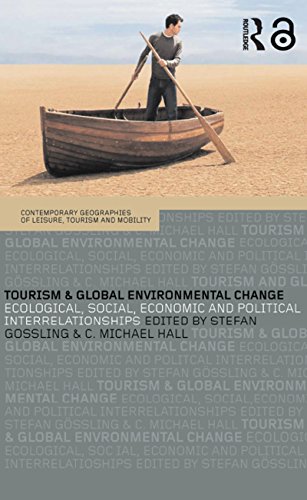 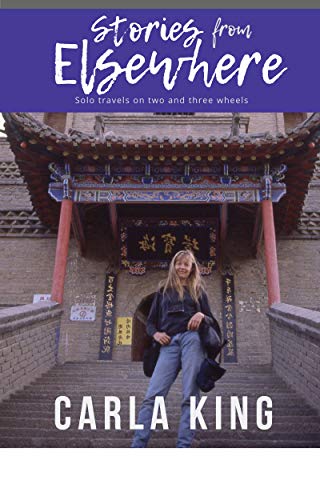 Stories from Elsewhere: Solo Travels on Two and Three Wheels

Proving that breakdowns and other disasters make for good stories, adventure travel journalist Carla King shares breakdowns in small towns all around the world. These selected stories are from solo journeys in the USA on a Russian Ural sidecar motorcycle, in China on its Chinese cousin, India on a Royal Enfield Bullet, France on a Bicycle, and Italy on a Moto Guzzi. 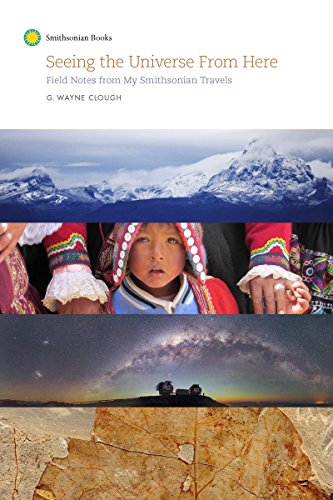 Seeing the Universe From Here: Field Notes from My Smithsonian Travels

As the Smithsonian Institution's twelfth Secretary, Dr. G. Wayne Clough traveled extensively to connect with researchers and gain a better understanding of the scope of the Institution's work. While the Smithsonian is comprised of nineteen museums and galleries, a National Zoological Park, and nine research facilities, it also has a research presence in more than one hundred countries.During his six years as secretary, Dr. Clough kept a detailed journal of his experiences and discoveries while on his travels, ranging from anthropology in Antarctica to pre-Columbian history in Peru from astrophysics in the Andes and the mountains of Hawaii to coral reef ecosystems off the coast of Belize, and from climate change in Wyoming to preserving endangered species in Kenya and Panama. Seeing the Universe From Here offers a firsthand perspective of the Smithsonian's global relevance in these progressive fields.