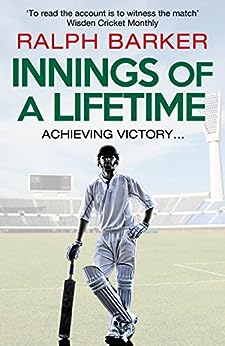 Innings of a Lifetime

Test series have offered a convincing reminder that there is no more exciting game than cricket.Especially when a close-fought contest reaches a climax at international level. In the course of a game, nothing is more thrilling than an innings in which a batsman rises above his fellows and his own shortcomings to play a decisive part in achieving victory — or it may be in avoiding defeat, or in salvaging national pride.The burly Peter Burge turning defeat into victory for Australia at Leeds in 1964, the young Colin Cowdrey saving England at Melbourne in his first Test series, the unorthodox Bob Barber setting such a frenetic tempo at Sydney that England had time to bowl Australia out twice, the two centuries by Glenn Turner that gave New Zealand their first win over Australia — these are among the examples of the first of these extremes. Ten of these momentous innings are reconstructed here, in the context of the match in which they were played, the series, and the careers of the individual players, and they have provided a rich vein for research and analysis. Readers will do more than re-live these innings as if from the terraces. They will walk to the crease with the batsman, and share the unforgettable experience that each innings contains.Praise for Ralph Barker:‘Stories of skill, patience, grit and swashbuckling verve retold in an urgent, compelling style. You are there on the terraces, in the game.’ - Times Educational Supplement‘Painstaking research coupled with real insight into the temperaments of his heroes gives a peculiarly graphic quality to his writing’ - Sunday Times‘His versions have the satisfactory roundness and wholeness of brilliantly written short stories.’ - The FieldRalph Barker was born in 1917 and educated at Hounslow College. He joined the editorial staff of Sporting Life in 1934, but later went into banking. In 1940 he joined the RAF as a wireless operator/air-gunner, and served in the Middle East and West Africa as well as the UK, before demobilisation in 1946. He returned to banking for a year, and then went into civil aviation as a radio officer. In 1948 he rejoined the RAF and went to Germany as a public relations office on the Berlin Airlift. His first book Down in the Drink was published in 1955.