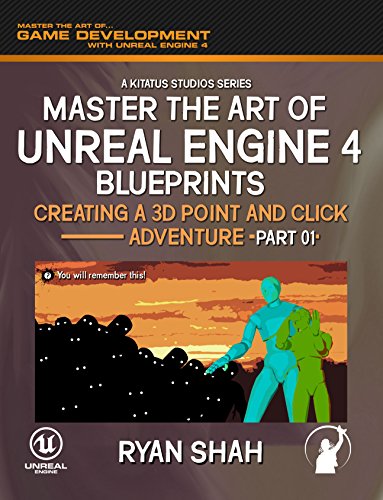 Have you ever played a video-game and wished you could make your own? Well, with the power of Unreal Engine 4 and this book... Now your dreams can now be reality!This book has been designed and crafted by independent developer Ryan Shah (of Kitatus Studios), who boasts over 10 years of experience working with video-game development tools as well as 2D/3D art applications.Ryan Shah will guide you through your adventures with Unreal Engine 4, Teaching you all the important information in an enjoyable, relaxed and entertaining style, which will help make sure you have the greatest possible adventure learning to create the video-game of your dreams.If you enjoyed 3D point and click adventure titles (Such as Telltale's The Walking Dead, Back to the Future, Sam and Max .etc) then this book is for you! In this title, we don't only cover how to create your own 3D point and click adventure project, but we also cover all the important pieces of Unreal Engine 4 that you'll need to make sure your projects rise above all others and become amazing titles that your fans will adore for years to come! 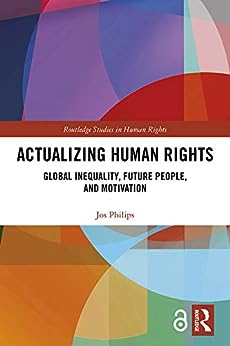 This book argues that ultimately human rights can be actualized, in two senses. By answering important challenges to them, the real-world relevance of human rights can be brought out; and people worldwide can be motivated as needed for realizing human rights.Taking a perspective from moral and political philosophy, the book focuses on two challenges to human rights that have until now received little attention, but that need to be addressed if human rights are to remain plausible as a global ideal. Firstly, the challenge of global inequality: how, if at all, can one be sincerely committed to human rights in a structurally greatly unequal world that produces widespread inequalities of human rights protection? Secondly, the challenge of future people: how to adequately include future people in human rights, and how to set adequate priorities between the present and the future, especially in times of climate change? The book also asks whether people worldwide can be motivated to do what it takes to realize human rights. Furthermore, it considers the common and prominent challenges of relativism and of the political abuse of human rights. This book will be of key interest to scholars and students of human rights, political philosophy, and more broadly political theory, philosophy and the wider social sciences. The Open Access version of this book, available at: https://www.taylorfrancis.com/books/9781003011569, has been made available under a Creative Commons Attribution-Non Commercial-No Derivatives 4.0 license. 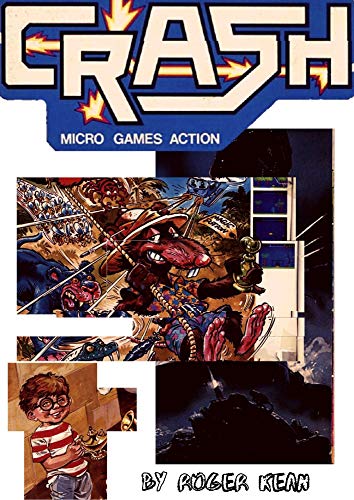 The Crash - Magazine about computer and video games: November 1984

The CRASH is a magazine about computer and video games. It illuminates all gaming platforms and portable consoles. It tells about computer games as part of contemporary mass culture.The magazine is intended for people who have a long history of electronic entertainment and are interested in the industry as a whole. The magazine focuses on global trends in the field of computer and video games. The target audience is players aged 16-30.The magazine puts emphasis on analytical articles about games and the industry, reportages from exhibitions, interviews, original columns of experts, materials on general topics (film, literature, intercultural cultural phenomena).The journal publishes reviews, analytical materials, news from the gaming industry, interviews with programmers, reports from foreign exhibitions and festivals, and original expert columns.Edition Number: The Crash November 1984 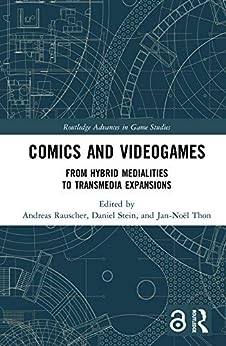 This book offers the first comprehensive study of the many interfaces shaping the relationship between comics and videogames. It combines in-depth conceptual reflection with a rich selection of paradigmatic case studies from contemporary media culture.The editors have gathered a distinguished group of international scholars working at the interstices of comics studies and game studies to explore two interrelated areas of inquiry: The first part of the book focuses on hybrid medialities and experimental aesthetics "between" comics and videogames; the second part zooms in on how comics and videogames function as transmedia expansions within an increasingly convergent and participatory media culture. The individual chapters address synergies and intersections between comics and videogames via a diverse set of case studies ranging from independent and experimental projects via popular franchises from the corporate worlds of DC and Marvel to the more playful forms of media mix prominent in Japan.Offering an innovative intervention into a number of salient issues in current media culture, Comics and Videogames will be of interest to scholars and students of comics studies, game studies, popular culture studies, transmedia studies, and visual culture studies. 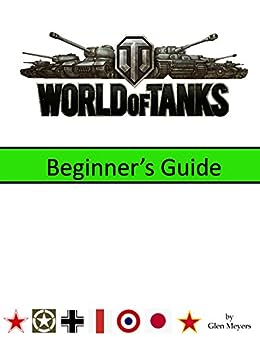 This short guidebook is for the absolute beginner in World of Tanks. While the game interface can be quite confusing for new players, this book explains the bare essentials on how to choose your tank and get started playing in Random Battles. This book is approx. 3,000 words. 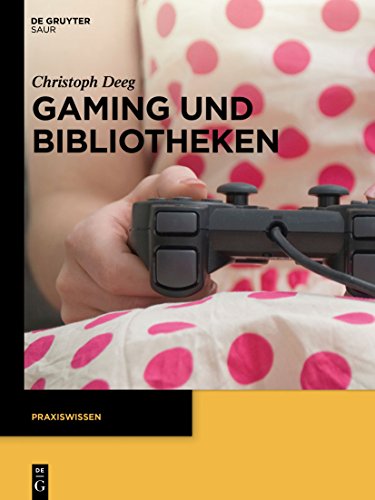 Using a theoretical review as a foundation, this volume for the first time provides a comprehensive review of the manifold possibilities for the use of gaming in libraries. It presents new trends in gaming as well as current activities being conducted by libraries to reveal the growing impact of gaming on the transmission of culture and knowledge. 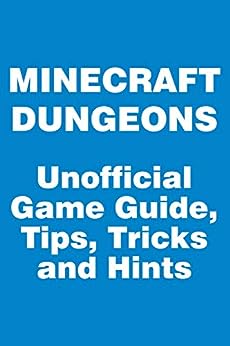 Before buying, please note that this is not an official Minecraft Dungeons Game Guide. This is a collection of Tips, Tricks and Hints that we found in the game.Minecraft Dungeons is an action/RPG with roguelike elements in the Minecraft universe and made in the same cubic style. Players have to roam the dungeons, destroying old familiar monsters and brand new critters, learn spells, create their own equipment and explore the world. Like the original game, Minecraft Dungeons supports a multiplayer mode for playing online with friends. 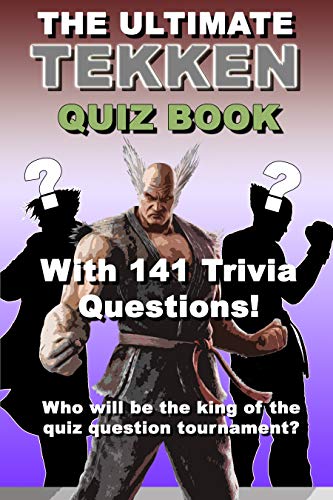 The Ultimate Tekken Quiz Book. With 141 Trivia Gaming Questions. Who will be The King of the Quiz Question Tournament? Put your Tekken Knowledge to the Test! (Video Game Quiz Book)

How skilled are you and your buddies in Tekken or Tekken 7?? Want more fun? Test your friends over an evening with true Tekken Quiz Power!This is the "The Ultimate Tekken Quiz Book. "The world's biggest pocket quiz book containing 141 action-filled fun facts trivia quiz questions with answers to one of the world's most famous and fabulous fighting game series ever made, Tekken. The book takes on various through various questions about characters, relations, the game titles, etc., and Tekken facts that will perhaps give you a surprise. Featured inside is an excellent range of topics and questions to truly test your Tekken skills outside the game. Test your king of iron brain knowledge and learn a couple of things you did not know about the amazing fighting games. As the series launched back in late 1994, there have been many games an interesting storyline of the Mishima family, plus new characters appearing throughout to this day. As of 2019, and 2020 marks the 25th anniversary of the Tekken.141 quiz questions for all games and gamers.Suggested Quiz rules inside.Tekken game and character facts +  more.Spend fun evenings testing more than just gaming skills.Play Team Battle, TAG, or One Vs. One!Bring along to parties of gatherings. Now get ready for the next battle, show 'em who is the strongest!! Buy Now with 1-Click 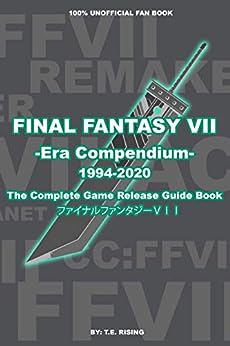 The legend is back, with over two decades of Final Fantasy VII, Cloud, and Sephiroth in numerous releases. In the making of Final fantasy VII to the Final Fantasy VII Remake. This book takes you on an adventure from development to launch with great insight and overview of all the titles in the FFVII saga.The book will give you an insight from when the first concept was put on the table in 1994 to the time of the first release in 1997. Followed by its success and flaws with the FFVII compilation series in the 2000s with; Before Crisis, Advent Children, Dirge of Cerberus and Crisis Core, etc.Information on release dates, concepts, and platforms, plus much more, as well as going into the production state of each title, how it was created, challenges and how it all got implemented with the compilation. What was it about this RPG-game title that made it so unique, so unique that now 20 years after the creators of the original game have decided to please the fans with an FFVII: Remake?Why did FFVII of all the Final Fantasy games become so different? Not only did the Final Fantasy series experience going from 2D to 3D back with Final Fantasy 7, but the game also changed platform, why did it go from supporting Nintendo over to the PlayStation?After 10 years of the game in 2007, happened to the series after that? Why was there still a demand for a total remake of the game, now 20 years after its release?From a longtime FFVII fan and FFVII collector, this book gives you the ultimate FFVII collection experience of more than 15 initial releases related to the games' main story. Not only covering the games but all other media that has been released during the last 20 years up until the release of the Remake 10th of April 2020 and beyond!As a true FFVII fan, make sure you also become an owner of this book, discover the story behind the creation of the Final Fantasy VII universe!Order now and enter the history behind one of the biggest titles in gaming history. 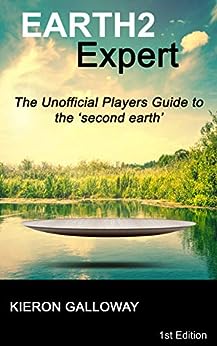 Earth2 Expert: The Unofficial Players Guide to the 'second earth'

Launched in late 2020, Earth2 has become an internet sensation. Big on vision and ambition, Earth2 has quickly captured the interest and imagination of gamers and other players worldwide.Positioned by the developers as a ‘futuristic concept for a second earth’ and based on a ‘virtual 1:1 scale version of Earth’, the possibilities for the Earth2 platform seem limitless.In Phase 1 of the game, players are able to buy and sell virtual land and property, to make E$ and to position themselves for future Phases of Earth2.This 100% unofficial guide shares hints and tips from an early adopter of Earth2 based on personal experiences, along with what is more broadly known at the time of publication (February 2021). Learn how to buy, sell and trade virtual land like an Earth2 pro.Note. This book is independent of Earth2 and is not connected with- or authorised by- the official Earth2 website or the game's Developers.